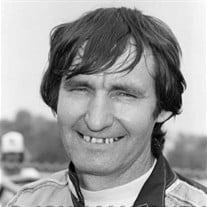 Donald Leon Gentry, age 74, of Henderson, KY, crossed the final finish line at 3:36 p.m. Saturday, September 28, 2019 at Methodist Hospital. Leon’s whole life revolved around cars and engines. He started working on cars at the tender age of 8 years old and never stopped. He was a dare devil who was full of life. He flew planes, raced motorcycles, raced cars, and restored engines. Leon was a friend to everyone and was the first to help anyone in need. He truly appreciated everyone and everything around him; always commenting on what a good life he has led. Leon adored his family and they adored him. He was preceded in death by his parents Haywood and Susan Gentry. Leon is survived by his wife of 55 years Linda Gentry of Henderson, KY; 2 daughters Brandi Neely and her husband Shane of Evansville, IN and Micki Shelton and her husband Scott of Henderson, KY; 2 sons Donnie Gentry and his wife Sharon of Henderson, KY and Chris Gentry and his wife Beth of Henderson, KY; 1 sister Jackie “Sissie” McHatton of Henderson, KY; 2 brothers Eugene Gentry and his wife Barbara of Henderson, KY and Larry Gentry and his wife Janet of Henderson, KY; 10 grandchildren: Cody Gentry, Haley Gentry, Kelsie Gentry, Libby Shelton, Macy Gentry, Hanna Shelton, Reid Pennington, Bella Shelton, Jack Gentry and Sophie Gentry; 3 step- grandchildren: Brittney Neely, Chelsea Oscarson and Dalton Neely; and 8 great- grandchildren. Relatives and friends are invited to Leon’s Life Celebration from 4:00 p.m. until 8:00 p.m. on Wednesday, October 2, 2019 and again on Thursday from 10:00 a.m. until the service time at Benton-Glunt Funeral Home. The funeral service will be held at 1:00 p.m. on Thursday at the funeral home with Reverend Bret Eblen officiating. Burial will follow in Roselawn Memorial Gardens in Henderson. Arrangements entrusted to Benton-Glunt Funeral Home, A Life Celebration® Home, online condolences may be made at www.bentonglunt.com.

The family of Donald Leon Gentry created this Life Tributes page to make it easy to share your memories.

Send flowers to the Gentry family.