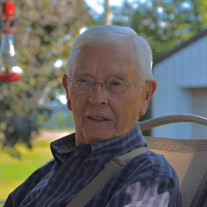 Daniel Frederick "Dan" Williams passed away at 5:15 p.m., Tuesday, July 13, 2021, at Ascension St. Vincent Evansville, after a brief illness. Dan was born on the family farm on November 28th,1926 and lived there until his dying day. His parents were Cameron J. Williams, Sr., and Mattie Hust Jones Williams, and he was preceded in death by them, by a brother, Cameron J. Williams, Jr., and Cameron’s wife, Rachel May Williams. Dan proudly served in the United States Army, near the end of the Second World War, and was assigned to the occupation forces in Japan after the war. On return, he attended the University of Kentucky, earning a B.S. in Agriculture, and came back to the farm, to marry the love of his life, Nancy Crafton, whose family owned the farm next door. They lived, farmed, raised a family, and anchored their lives in their neighborhood and their church, Bellfield Baptist. Dan retired from Urbana Laboratories as an ag-products salesman, having covered a territory that stretched from Kentucky to Florida, and from Missouri to Georgia. He rarely met a stranger, and often discovered a connection after cross-examining people he encountered. He had a life-long love of pure knowledge, reading every book, magazine, and newspaper he could get his hands on. He was a member of the UK Alumni Association, and a Kentucky Colonel. He is survived by his wife of 65 years, Nancy C. Williams; daughters Rhonda Jo Siewert, and her husband Jimmy; Lori Beth Heady, and her husband David; son Tom Williams, and his wife Marlene; grandchildren: Jason Siewert, and his wife Andrea; Jayme Jo Vowels, and her husband Craig; Alan Garner, and his wife Maggie, all of Henderson; and Daniel Williams, of Denver, Colorado; great-grandchildren: Brady Siewert, Will Siewert, Jud Siewert, Levi Patterson, Jaci Jo Vowels, Madison Vowels, Eli Vowels, and Theo Garner; brother-in-law Robert D. Crafton and his wife, Jica; sister-in-law Patricia Ann Bockenkamp and her husband, Donald; nieces, nephews, cousins, and many friends. Relatives and friends are invited to Dan's Life Celebration from 5:00 p.m. until 7:00 p.m. on Thursday at Bellfield Baptist Church, and again from 10:00 a.m. until service time on Friday at the church. The funeral service will be held at 11:00 a.m., Friday, July 16, 2021, at the church with Dan’s nephew, Reverend James A. Williams, officiating. Burial will follow at Roselawn Memorial Gardens in Henderson. In lieu of flowers, expressions of sympathy may take the form of contributions to Bellfield Baptist Church Building Fund, 9980 Hwy 136 East, Henderson, KY 42420. Arrangements entrusted to Benton-Glunt & Tapp Funeral Home, A Life Celebration® Home, online condolences may be made at www.bentongluntandtappfuneralhome.com

Daniel Frederick "Dan" Williams passed away at 5:15 p.m., Tuesday, July 13, 2021, at Ascension St. Vincent Evansville, after a brief illness. Dan was born on the family farm on November 28th,1926 and lived there until his dying day. His parents... View Obituary & Service Information

The family of Daniel Frederick "Dan" Williams created this Life Tributes page to make it easy to share your memories.

Send flowers to the Williams family.