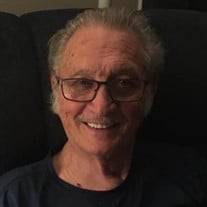 Charles Edward Carlisle, age 78, of Henderson, KY, passed away on Sunday, October 10, 2021 at North Park Nursing Center in Evansville, IN. He was preceded in death by his father John Hilary Carlisle, mother Minnie Bell Abbott, step-father Gilbert R. Abbott,his brother Gary Carlisle, many brothers-in-law, and many sisters-in-law. Charles was a United States Vietnam Air Force Veteran and served in the National Guard. Charles was lovingly known as Charlie, Pop, or Crazy Carlisle. His hobbies included hunting, fishing, cooking wild game, watching T.V. and movies. Playing pool and having his family and friends gathered around him was when he was the happiest. Charlie enjoyed raising rabbits, raccoons, camping, and going bowling. He was a founding member of Countryview General Baptist Church. Charlie was the proudest parent, grandfather, and uncle. He was everyone’s biggest and loudest cheerleader. He liked to spend his time at the Senior Citizen Center now known as the Gathering Place. Charlie is survived by his wife of 53 years Klethern Carlisle of Henderson, KY; daughter Margie Butler and her husband Michael of Henderson, KY; son Chester Carlisle and his wife Holly of Henderson, KY; he was also a father to Kelli Bush of Henderson, KY; sisters Bettye Abbott and husband Raymond of Henderson, KY and Jeanie Knight and her husband Pete of Henderson, KY; brother William Lee Carlisle of Lynnville, IN; several grandchildren, great-grandchildren, and nieces and nephews. Relatives and friends are invited to Charlie’s Life Celebration from 4:00 until 8:00 p.m. on Thursday and on Friday from 9:00 a.m. until the service time at Benton-Glunt & Tapp Funeral Home. The funeral service will be held at 11:00 a.m. on Friday, October 15, 2021 at the funeral home with Reverend Gary Ashby and Reverend Randy Duncan officiating. Burial will follow at Baskett Cemetery in Baskett, KY with Raymond Abbott as graveside officiant. In lieu of flowers, expressions of sympathy may take form of contribution to Countryview Baptist Church, 2067 Gregory Dr, Henderson, KY, 42420 and Bread of Life Ministry, 13200 Spurgeon Rd, Lynnville, IN, 47619. Arrangements entrusted to Benton-Glunt & Tapp Funeral Home, A Life Celebration® Home, online condolences may be made at www.bentongluntandtappfuneralhome.com.

The family of Charles Edward Carlisle created this Life Tributes page to make it easy to share your memories.

Send flowers to the Carlisle family.