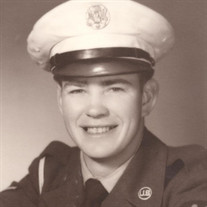 Bobby E. Carr, age 88, of Henderson, KY, passed away at 1:19 p.m., Saturday, February 26, 2022, at Deaconess Gateway Hospital in Newburgh, IN with his children by his side. He faithfully served his God, his Country, and his Family with honor and distinction. Bobby was born in Muhlenberg County in 1933 to John and Mary (Stone) Carr. He graduated as class vice president in 1953 from Drakesboro High School. That same year, he married the love of his life, Dorothy Beatrice “Bea” (Tooley) Carr in Springfield, TN. Bobby retired after a distinguished career in the United States Air Force as an Aircraft Loadmaster Technical Sergeant and primarily served in Special Operations for 24 years. He was a 5 tour Vietman veteran and proudly served his country with stations in England, Okinawa, Japan, and multiple military bases in the United States. Bobby’s second retirement was from Service Master as a Hospital Director of Engineering in Des Moines, Iowa. Bobby was a faithful man and enjoyed a long and active membership with Airline Baptist Church. He served as a church deacon and was active in the local Henderson Camp with the Gideons, Int. Some of Bobby’s hobbies were traveling, reading, wood crafting, and enthusiastically cheering for UK in any sport. His heart for his community was evident in his many volunteer hours with Marsha’s Place, St. Anthony’s Hospice, and The Answer Center. In addition to his parents, John and Mary, and his beloved bride of 64 years, Bea, Bobby was preceded in death by his sister Carolyn Arndell, son Kenneth E. Carr, and great grandson Christopher John Carr. Bobby is survived by daughter Alisha Carr and her fiancé Sam Bellew of Henderson, KY; sons Michael Ray Carr and his wife Anita of Olathe, KS and John “Dan” Carr and his wife Tammy of Providence, KY; grandchildren: Tina Carr, John Carr, Steve Carr, and James Emerson; brother-in-law Gilbert Simmons; several nieces and nephews; and his faithful dog Bella. Relatives and friends are invited to Bobby’s Life Celebration from 6:00 until 8:00 p.m. Friday, March 11, 2022, and again on Saturday starting at 9:00 a.m. at Benton-Glunt & Tapp Funeral Home in Henderson, KY. The funeral service will be held at 11:00 a.m. on Saturday, March 12, 2022, at the funeral home with Reverend Nathan Whisnant officiating. Burial will follow at Rose Hill Cemetery in Central City, KY. Military honors will be rendered by the American Legion Worsham Post #40. Expressions of sympathy may take the form of contributions to Airline Baptist Church, 1942 Clay Street Henderson, KY 42420, www.airlinebaptistchurch.net and St. Anthony’s Hospice 2410 S. Green Street, Henderson, KY 42420, www.stanthonyshospice.org. Arrangements entrusted to Benton-Glunt & Tapp Funeral Home, A Life Celebration® Home, online condolences may be made at www.bentongluntandtappfuneralhome.com.

Bobby E. Carr, age 88, of Henderson, KY, passed away at 1:19 p.m., Saturday, February 26, 2022, at Deaconess Gateway Hospital in Newburgh, IN with his children by his side. He faithfully served his God, his Country, and his Family with honor... View Obituary & Service Information

The family of Bobby E. Carr created this Life Tributes page to make it easy to share your memories.

Send flowers to the Carr family.