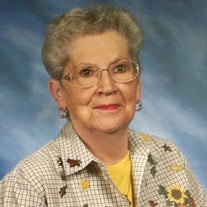 Barbara M. Butler, age 92, of Henderson, KY, passed away on February 20, 2022 at Colonial Assisted Living in Henderson, KY. Barbara was a lifelong member of St. Paul’s Episcopal Church and had a wonderful church family. Their love and care were immeasurable. She retired from Accuride Corporation. Barbara was an early supporter and volunteer for Christian Community Outreach. The work they do to help those in the community made her proud of her hometown and it’s people. The family would like to thank all the wonderful staff at Colonial for their extra care in these last few weeks. Colonial had been her home for the past 8 years and the staff were family too. Barbara was preceded in death by her parents John Frederick Mahler and Mildred M. Brown, first husband Randy Shiver, second husband Eugene C. Butler, and her siblings, Patricia Black, John Mahler, and Charles Mahler. She is survived by her son Larry Shiver (Christa) of Henderson, KY; daughter Becky Shiver Reaves (Fred) of Hazel, KY; 4 grandchildren who were her greatest joys: Amber Claybrook, Erica Shiver Haynes, Sara Reaves Watkins, and Chris Reaves; 5 great-grandchildren; and nieces and nephews. There will be a Life Celebration at a later date. Barbara would ask if you wish to honor her memory you make a contribution to St. Paul’s Episcopal Church, 5 S. Green St, Henderson, KY, 42420, St. Anthony’s Hospice, 2410 S. Green St., Henderson, KY, 42420, or Christian Community Outreach, 700 N Green St, Henderson, KY, 42420. Arrangements entrusted to Benton-Glunt & Tapp Funeral Home, A Life Celebration® Home, online condolences may be made at www.bentongluntandtappfuneralhome.com.

Barbara M. Butler, age 92, of Henderson, KY, passed away on February 20, 2022 at Colonial Assisted Living in Henderson, KY. Barbara was a lifelong member of St. Paul&#8217;s Episcopal Church and had a wonderful church family. Their love and... View Obituary & Service Information

The family of Barbara M. Butler created this Life Tributes page to make it easy to share your memories.

Send flowers to the Butler family.