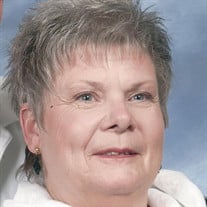 Barbara Berry, age 70, of Henderson, KY, passed away at 1:53 a.m. on Tuesday, June 15, 2021 at the Lucy Smith King Care Center under the care of St. Anthony’s Hospice. She was preceded in death by her parents Christian and Ruth Majors and one sister Jan Johnson. Barbara was a hardworking woman. She provided for her family and never shied away from hard work. She was a member of Audubon Baptist Church for many years. Barbara was apart of a knitting circle in Newburgh and enjoyed the fellowship that the group offered. She was a fabulous cook; from her porkchops to her meatloaf, it was all good. Barbara often said that what made her most proud in life was being a mother. She is survived by her husband Robert Berry of Henderson, KY; daughters Marci Vandermeer of Louisville, KY and Christy Nesmith of Henderson, KY; step-son Nick Berry of League City, TX; sister Rita Gish of Henderson, KY; grandchildren: Brylee, Blake, Bryce, Kandace, Kassius, Autumn, Hannah, Addison, Emilie, and Daniella; and her forever golden girls Jane Gaines and Dawn Ashworth. Relatives and friends are invited to Barbara’s Life Celebration from 11:00 a.m. until the service time on Saturday, June 19, 2021 at Benton-Glunt & Tapp Funeral Home. The memorial service will be held at 1:00 p.m. on Saturday at the funeral home. In lieu of flowers expressions of sympathy may take the form of contributions to St. Anthony’s Hospice, 2410 S. Green Street, Henderson, KY, 42420. Arrangements entrusted to Benton-Glunt & Tapp Funeral Home, A Life Celebration® Home, online condolences may be made at www.bentongluntandtappfuneralhome.com

Barbara Berry, age 70, of Henderson, KY, passed away at 1:53 a.m. on Tuesday, June 15, 2021 at the Lucy Smith King Care Center under the care of St. Anthony&#8217;s Hospice. She was preceded in death by her parents Christian and Ruth Majors... View Obituary & Service Information

The family of Barbara Berry created this Life Tributes page to make it easy to share your memories.

Send flowers to the Berry family.