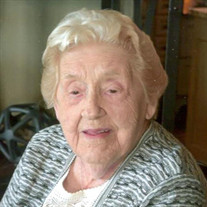 Anna Louise McBride Fife, age 94, of Henderson, KY, passed away on August 12, 2020 at her home under the care of St. Anthony’s Hospice. In addition to her parents, James and Birdie McBride, Anna was preceded in death by her husband LTC Portwood Fife; 2 brothers Harry Lee McBride and James William McBride Jr.; and 1 sister Ruth Marion Barron. In her early years, Anna worked for AT&T as a telephone operator. After marriage, her focus was on her husband and raising a family. Anna was a military wife, as such, her young family often moved from base to base. Upon returning to Henderson, Anna worked as a switch board operator at Methodist Hospital until her retirement. Anna was a wonderful cook and had a long-time tradition of big family dinners every Sunday. She also loved to travel. She never asked to go anywhere but was always quick to accept any invitation. Anna was better known as “Granny” to all of her family members and friends. Out of all of the things she loved in life, nothing compared to her love for her children, grandchildren, and great grandchildren Anna is survived by 3 daughters: Portia Fife (Rick Moore) of Bremen, KY, Sonya Howard (Leo) of Owensboro, KY, and Barbara Marlin (Donald) of Henderson, KY; 1 son Kelly Fife, M.D. (Sally) of Henderson, KY; 4 sisters: June Cavanah, Betty McBride, Jessie McBride, and Lois Swallows, all of Henderson, KY; 7 Grandchildren: Rebecca Helm (Jonathan), Michael Eich (Anne Marie), Melanie Eich, Stephen Eich, Luke Fife (Emily), Joshua Fife, and Isaac Fife; 6 Great Grandchildren: Navy and Brighton Helm, Isabelle Eich, Mary Emma, Lucy, and Pearson Fife; Nieces & Nephews. Relatives and friends are invited to Anna’s Life Celebration from 9:30 a.m. until 12:30 p.m. Saturday, August 15, 2020 at Benton-Glunt and Tapp Funeral Home in Henderson, KY. Anna’s funeral service and burial will be private. Arrangements entrusted to Benton-Glunt & Tapp Funeral Home, A Life Celebration® Home, online condolences may be made at www.bentongluntandtappfuneralhome.com

Anna Louise McBride Fife, age 94, of Henderson, KY, passed away on August 12, 2020 at her home under the care of St. Anthony&#8217;s Hospice. In addition to her parents, James and Birdie McBride, Anna was preceded in death by her husband LTC... View Obituary & Service Information

The family of Anna Louise McBride Fife created this Life Tributes page to make it easy to share your memories.

Send flowers to the Fife family.