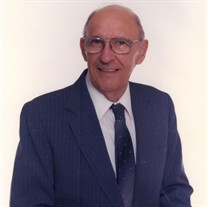 Toy Powell, age 97, of Robards, KY, died at his home on March 20, 2021. He was born in Henderson County, KY near Robards on April 23, 1923. Following a 3- year stint in the United States Navy SeaBees during WWII, he farmed in Henderson County soil for much of his adult life and worked as a rural letter carrier for 33 years. Toy was a lifelong member and served as an Elder for Robards Christian Church and was ordained as a Minister of the Gospel of Jesus Christ. He enjoyed teaching Sunday School and preaching as well as writing both Christian fiction and Bible Study materials. We remember him as a loving husband, devoted father and grandfather, a gentle soul, and a precious child of God. In addition to his parents, Guy Sales Powell and Lula Toy Powell and stepmother, Minnie Jeffries Powell, Toy was preceded in death by his first wife of over 51 years, Marjorie Deloris King Powell, and his second wife of nearly 20 years, Elizabeth Puryear Nunn Powell as well as one son, Paul Steven Powell. He was also preceded in death by two brothers, Elbert Powell and James Powell. He is survived by one daughter, Barbara Ann Call and husband Larry of Murray, KY as well as two sons, James Allen Powell, and Larry Wayne Powell both of Robards, KY. There are three grandchildren, Benjamin (Ginger) Call of Murray, KY, Llana (Terry) Smith of Charlotte, NC, and David (Tiffany) Call of Alamogordo, NM, as well as three great-granddaughters: Krysten, Emilee, and Jaina. Toy is also survived by three stepchildren: Dennis (Judy) Nunn, Mary (Dennis) Davis, and Claudia (Jeff) Perkins, all of Henderson County, KY. Relatives and friends are invited to Toy’s Life Celebration from 10:30 a.m. until the service time on Saturday, March 27, 2021 at Robards Christian Church in Robards, KY. The funeral service will be held at 12:00 p.m. on Saturday at the church with Reverend Amy Cates and Reverend Larry Call officiating. Burial will follow at Fairmont Cemetery in Henderson, KY. Expressions of sympathy may take the form of contributions to Robards Christian Church, 1120 Seminary Street, Robards, KY, 42420. Arrangements entrusted to Benton-Glunt & Tapp Funeral Home, A Life Celebration® Home, online condolences may be made at www.bentongluntandtappfuneralhome.com

Toy Powell, age 97, of Robards, KY, died at his home on March 20, 2021. He was born in Henderson County, KY near Robards on April 23, 1923. Following a 3- year stint in the United States Navy SeaBees during WWII, he farmed in Henderson County... View Obituary & Service Information

The family of Allen Toy Powell created this Life Tributes page to make it easy to share your memories.

Send flowers to the Powell family.